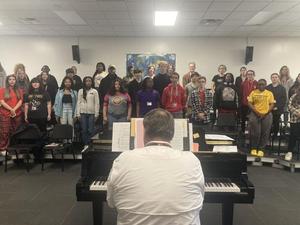 Community members looking to celebrate Veterans Day and the talents of local young musicians will be able to do so Monday at a concert titled “Homeland,” the first of its kind.

The concert will be a salute to local veterans and will feature numerous patriotic musical performances.

Doors will open at 6:30 p.m. Monday at the Glynn Academy auditorium, and the free concert will begin at 7 p.m. and last a little more than an hour.

It will also be possibly the first time the Glynn Academy choir comes together with Glynn Middle School and Risley Middle School choir groups for a performance of this kind.

“I’ve worked here since 2005, and this is the first time that we’re having a combined concert with high school and our feeder middle schools,” said Nathaniel Roper, director of choral and orchestral activities at Glynn Academy.

Around 100 students will be part of the performance.

Eddie Vanderbeck, president of the Coastal Georgia Honor Flight, will be the guest speaker.

“Half of all the donations we receive from this concert will go toward the Coastal Georgia Honor Flight,” Roper said.

The coronavirus pandemic’s forced closures and restrictions have impacted arts programming involvement in local schools, and programs like choir have struggled to recruit new students lately.

This concert is part of the effort to get more students involved, Roper said.

“As we’re trying to rebuild from that, something we’re trying to do is include the middle schools and hopefully get the younger kids excited about it,” he said. “What better way to bring everybody together than to salute our veterans?”

The show will highlight the unique talents of all students involved in the performance, and younger students will have a chance to learn from their older peers.

“They get to hear and listen and watch what we’re doing,” said Ben Flores, a junior.

Student leaders in the choir also noted that Roper’s many years as choir leader at Glynn Academy means he brings a wealth of knowledge to the program.

“It’s just a lot of knowledge that Mr. Roper has,” said Sanders Ragsdale, a senior. “He’s always been our teacher, we’ve had him all four years, pretty much. It’s been nice having him to refer to every year and to give us advice.”

“This concert is centered toward veterans, and we have a big community of veterans here,” he said. “If you love music, you should come out and see. It’s just a good time.”

And it’s for a good cause, he added.

“It’s important for as many people as possible to come out and see us, partly because we like to have people in the audience, but also because of what we’re raising money for,” Harrison said. “It’s very much needed and will be great for the community.”

Lots of talent will be on display, said Hannah Kirchner, senior

“We have a lot of talented kids, so its nice to see everyone up there,” she said. “They’re good at what they do.”