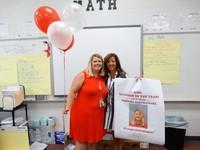 Valinda Szychowski has always had a strong dedication for working and interacting with students in and outside of the classroom. She graduated from Armstrong Atlantic State University in 2006 with a Bachelors in General Studies and began her teaching career in Brantley County, Georgia. Over the last 14 years, she has taught Gifted 7th and 8th grade Mathematics and Social Studies in New Mexico, 6th grade Mathematics in Maryland, and 7th grade Social Studies for the last six years here at Glynn Middle. In 2017,  she earned her Masters in Curriculum and Instruction from Walden University.

During her time here at Glynn Middle, she has coached volleyball and soccer consecutively for six years. Her collegiate experience provided valuable instruction for both teams which led to great successes. The highest honor was awarded to the soccer team for six years in a row by being named City Champions. After always being one of the top teams in Volleyball, the team won the City Championship in 2018.

Mrs. Szychowski has truly enjoyed working at Glynn Middle and helping shape the minds of the future. She goes above and beyond the responsibilities in her realm as a classroom teacher and with her colleague collaboration.  Her enthusiasm for being around students is contagious as is her attitude in general. Leadership is one of her best qualities and is observed in her role as a Team Leader in seventh grade.  Serving as sponsor of Model UN exhibited those same qualities to those students who participated.

Mrs. Szychowski is married to Bryan Szychowski and has two children, Reese, (4th grade) and Ian, (pre-k) both at C.B. Greer.