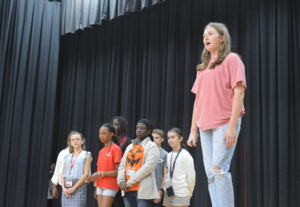 The Hurricane Players at Glynn Middle School will debut this week their first production since the coronavirus pandemic slowed the program’s activities.

Students will perform the show “Hoodie” at 7 p.m. Wednesday and Thursday at Glynn Middle, 635 Lanier Blvd. in Brunswick. Tickets cost $5 and are free for children 6 and under.

“Hoodie,” a vignette-style play, dissects the tough questions and battles teenagers face on a regular basis.

Susannah Mize, a sixth-grade instructor at Glynn Middle who has revived the Hurricane Players, chose this production because she felt it would speak to the student actors.

“It’s all about the struggles of middle school and different things that kids are dealing with, whether that’s fitting in or having the coolest clothes or being in with your friends,” she said. “Or, it asks if you should stand up and be that ‘Hoodie’ character and do your own thing and be your own person.”

The show was originally set to be staged in 2020. But then, COVID-19 happened.

The drama program at Glynn Middle School — the Hurricane Players — is now being reenergized through Mize’s leadership and the enduring hard work of the students.

Nearly 30 are involved in the upcoming production.

“I knew that I wanted to start the drama club because I was involved in theater in middle school and high school, and that was something I loved,” Mize said. “And I thought if I can start this here, maybe that will sprout something for some of these kids.”

This play will be the first since the program’s revitalization, and the community is encouraged to come out to support the students.

They’ve been working on the show since auditions in August. Mize said there’s much more involved in preparation than just learning lines.

“The students have been staying after school one to two times a week for an hour plus, working on the blocking … We had to teach them how to open the curtains for our stage crew and how to set up props,” Mize said. “We’re currently working on building their confidence because it is a scary thing to stand up in front of people.”

Building self-esteem is one of the many benefits students experience when they participate in drama programs like this, Mize said.

She hopes the students will get a chance to perform “Hoodie” in front of a large audience.

“Come and see it because there’s nothing like performing to a full house,” Mize said. “These kids have worked so incredibly hard, and they deserve to perform in front of that full house. It further validates their efforts and their desire to put on a great show.”